After adapting and publishing the 2 PS2 cores (2048 and QuickNES) on PS4, here is another PS2 emulator adapted for our dear PS4: PGEN.

PGEN is a Megadrive / Genesis emulator, so you can launch your megadrive ROMs on your PS4.

This emulator uses the PS2 part of our PS4, although it is not native, it works very well.

This may cause waiting until the publication of RetroArch version PS4.

You can copy as many ROMs as you want in the ROMS folder, even put a fullset if you want, only thing to respect is to put ROMs in .bin format ...

Another clarification, in the options of the emulator, configure the line "Renderer" on Line and not cell to correct some graphic problems.

Tutorial:
PS: Another emulator is being tested and works pretty well, if you want to track my future projects and have a glimpse of this future moved, all that goes on here: https://twitter.com/Markus00095 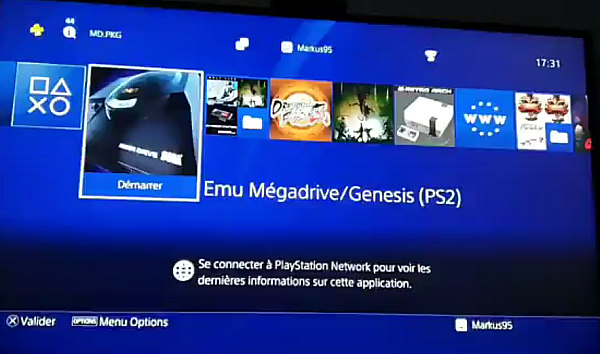 Developer
Senior Member
Contributor
Your limitation is all cause this is a handheld portable version device released in 2018 I believe and uses classics on memory card that obtains a Mp3 hack in the core system.

I pulled pc version as well just to take a loop it's just a DLL of 2048 core.

The ps2 will be based on the actual card limits which could be 8mb if member correctly.

Developer
Senior Member
Contributor
Verified
Thanks, runs and works better then I expected... for the great work.

Senior Member
Contributor
Thanks for guide but im stuck lol. Made new fpkg with just 2 roms sonic 1 and streets of rage2 installed to ps4 pro. gets stuck on black screen NO playstation 2 logo so i wonder if the disc01.iso is not made correctly? tried with CDGenPS2_v3.0 maybe i did it wrong any chance of a video tut please

If the names are wrong even a good iso won’t work.

Senior Member
Contributor
Thanks for the help turns out my problem was the CDGenPS2_v3.0 was not saving the disc01 image correctly got it sorted though now have the EMU working 100% with sonic 1 - Ecco and streets of rage 2. many thanks amazing EMU.

Developer
Senior Member
Contributor
This Genesis unit is manufactured by atGames i believe look at the unit and details. the emu is already in retroarch on pc looking through it

Senior Member
Contributor
Verified
Do the roms need to be in bin format in the Nintendo emulator as well? If so that explains what ive been doing wrong

Senior Member
Contributor
anyone got a link for a pkg already loaded with roms ?

You must log in or register to reply here.
Share:
Facebook Twitter Reddit Email Link
Recent Articles
Sony Unveils First Look at Box Art for Upcoming PS5 Games
Topping the PlayStation 5 News today is a PS5 Box Art Unveiling giving everyone a sneak peek at what PS5 games will look like when seen on store shelves this Holiday 2020 season.