This video covers how to use my PS4 Package Sender app to send multiple PS4 PKG files from any location on your computer to your PS4 over your LAN connection. 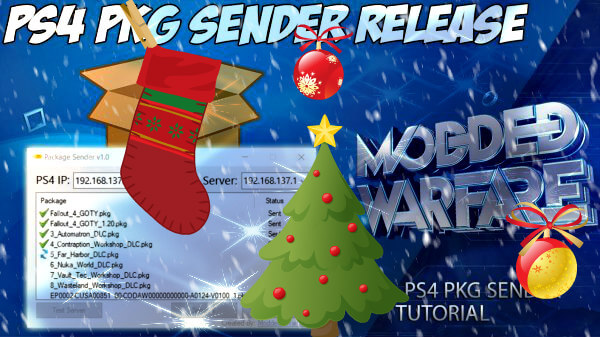 Member
Contributor
Verified
I used RPI_GUI: PS4 Remote Package Installer Web GUI by Sc0rpion, until now. With PS4 Package Sender, speed drastically increase, but I have one problem: pkg file is transferred and installed on PS4 successfully through PS4 Package Sender, but program window still display - sending and next pkg file not start to transferring. Any solution, thanx!

Member
Contributor
Verified
In my case, when i send pkg with old method everything working smoothly but with this release pkg sender every connection broke in middle of transfer.

Developer
Senior Member
Contributor
@ZBaba Yeah your connection speed is too slow and it's causing a timeout during the transfer.

Member
Contributor
Verified
@MODDEDWARFARE Thanks for the reply, but my connection is directly to pc, like in one of your videos.

The short explanation: I want to update a picture in a pkg on PS4. Yes, it’s extraordinarily unimportant and probably not worth anyone’s time. Nonetheless...

​
The long explanation: As you can hopefully see from the picture, there is an addon for The Witcher 3 (the Skellige armor set) that has a placeholder picture instead of the proper one in the addons menu on PS4. I was wondering if it’s possible to update the dlc’s pkg with the right pic.

Here’s my reasoning: I little while ago, I used the guide from this site to redownload P.T. I was thinking maybe we could modify The Witcher 3 dlc’s pkg and download it to a PS4 using a proxy server, not unlike the method used to redownload P.T.

What do you guys think? I’m very curious to understand why it would not be possible to do this? Or maybe it is? Could it be an interesting challenge for hackers? And so you know, I don’t have a jailbreak PS4.

P.S. This dlc has always been with the placeholder picture. Contacting CD Project Red has not given anything unsurprisingly (not that they have a huge game coming up or anything... ).
You must log in or register to reply here.
Share:
Facebook Twitter Reddit Email Link
Recent Articles
Call of Duty: Advanced Warfare PS4 Mod Menu 1.23 is Now Available
Earlier this week we saw some GTA V PS4 Mod Menu 2020 Demos, and today PlayStation 4 scene developer @CustomHooker shared via Twitter a Call of Duty: Advanced Warfare PS4 Mod Menu 1.23 with help...
PlayStation Store's Totally Digital Sale Live with Savings on PSN Games
Get set to awaken a mysterious power within to save the world in Indivisible, make a daring escape with a little help from a friend in A Way Out or fight your way through the perfect run in the...
PlayStation 5 User Interface (PS5 UI) Rumored Image Leak Surfaces
An image that is rumored to be a screenshot of the current PlayStation 5 User Interface (PS5 UI) has reportedly leaked by an Anonymous game studio employee on the popular 4Chan bulletin board.