Nintendo       Thread starter PSXHAX       Start date Sep 28, 2017 at 1:46 AM       16,241       10
While the SNES Classic Edition won't be officially released until September 29th, retrogaming hackers on Reddit already confirmed that Hakchi2 can dump / write the SNES Mini's kernel as-is meaning it's essentially as hackable as the NES Classic Edition was jailbroken earlier this year!

To quote from SpongeFreak52 on Reddit: Managed to get my Best Buy ordered SNES Mini shipped in this afternoon, so I was excited to start toying with it since it doesn't seem like others have yet.

After playing a few games, I wanted to see how it would behave when thrown at Hakchi2. To my surprise (though I guess I shouldn't have been given the hardware similarities), it CAN have its kernel dumped and re-written with it with the current version. I even threw a NES Mini kernel at it just for kicks (spoiler: nothing happens -- the power light just blinks) then reverted back to the SNES kernel with no issues.

Though I don't assume there's much else that can be done with existing tools at this point, I figured people would be interested to know that the recovery mode seems to behave the same as the NES Mini's.

UPDATE: Looks like full NAND-dumping capabilities are in working order -- a European dump has already even been confirmed bootable on an NES Mini! (credit to /u/madmonkey1907)

As a nice surprise, it looks like Nintendo fully anticipated this, and left a note for tinkerers within the NAND! Hidden within the /etc directory is a file simply named "nineties", which contains:

Code:
PS: Thank you guys for the gold! Be sure to send some towards those who actually know what they're doing with this thing though!

Thanks to @LightningMods for the news tip in the PSXHAX Shoutbox tonight! 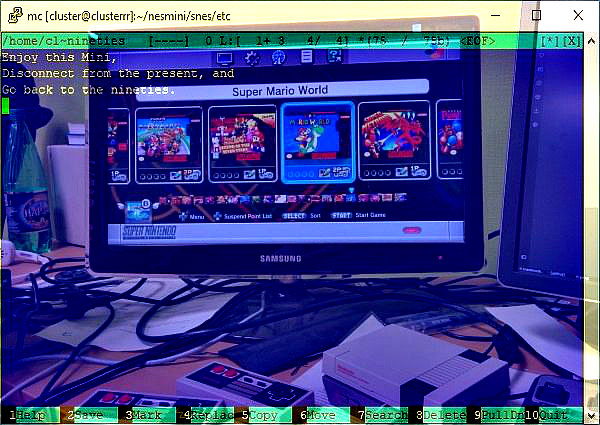 Senior Member
Contributor
Star Fox 2 has been dumped as well.

Staff Member
Moderator
Verified
Ha! I figured that would happen, didn't think it would be this soon tho

Kraken said:
Star Fox 2 has been dumped as well.
Click to expand...

Here is the link to Star Fox 2 dump

Staff Member
Moderator
Verified
Thanks @GrimDoe, I peeked at the Reddit thread yesterday but only saw reports of it without any download links so much appreciated for passing it along!

Member
Contributor
It's a really really great news !
Thanks for all

Member
Contributor
Verified
Does the new one have new hardware like people are saying that will not work with current hakchi2?

Senior Member
Contributor
it was a nice release for a classic console
given the core used, a 5 stage pipelined 32 bit processor.
run it on a cortex A9 and get a buttery smooth performance
of course there are other uses for going digital

though if most corps like nintendo and sony are going down the classic console
makes sense if you are dealing with a quad core cpu as base to port to Free RTOS eh?