As planned, today PlayStation 4 hacker Marcan of Fail0verflow covered how they reverse-engineered Sony's PS4 console via FreeBSD / Sandbox to install PS4 Linux on it at Chaos Computer Club (CCC) 2016 alongside a Portal 2 Steam (older Demo / Guide) PS4 demonstration video below on Firmware 4.05!

According to @Joonie of Team Rebug, PlayStation 4 developer @flatz got PS4 Linux running on Firmware 4.05 day 1 too!

Here are some of the related Tweets and files / links / videos: 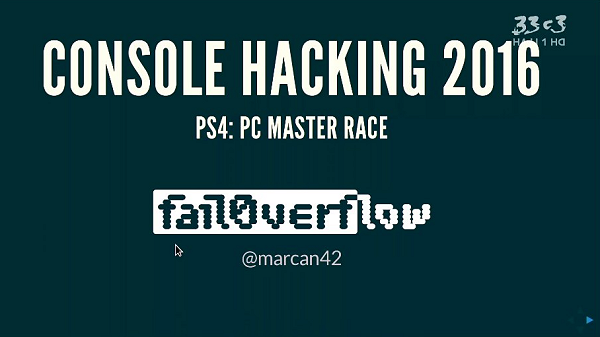 Senior Member
Contributor
Verified
Not we.... they run linux!

I read on internet about this

"confirmed that Fail0verflow do not intend to release any exploit for the PS4, as their focus is 100% on the Linux port"

Senior Member
Contributor
I'm 10000 % sure, TRSi will release the exploit and the other stuff and they maybe work or get the stuff from FailOverflow. Why? Because NO ONE would spend so MUCH time to port linux and put it on github so NO ONE CAN USE IT. Mostly no one. Who the hell would do that.

It's pretty safe that we will have an exploit release soon.

Senior Member
Contributor
I want to know with everyone respect: when can we put this into practice in 4.05?
And some video to teach how to proceed?
And when will we finally have the pandora box open?

Staff Member
Moderator
Verified
Fail0verflow provided what's needed for devs, and confirmed it's not that hard for someone else talented to figure out so they don't need to be the ones to release the exploit.

That said, I too believe someone else will take the reins from them and push the PS4 scene forward.. hopefully someone who isn't as concerned about credit and will do it 'anonymously' to protect themselves from Sony... the big question is when.

Senior Member
Contributor
Verified
The tweets mention what "$ony" did to geohot. Is there an article that can back up that claim or is it an inside community only?

Staff Member
Moderator
Verified
I linked to this in the article above, from Sony's blog: http://blog.us.playstation.com/2011/04/11/settlement-in-george-hotz-case/

Also for those who want to see the slides they are now live: