Despite Sony trying to block some PS4 Playground versions, this latest revision comes following the PS4 1.76 Advanced WebKit Playground and recent 4.05 updates from SpecterDev on Discord.

From the README.md, to quote: ps4-entrypoint-176

Intended to be used with payloads developed using ps4-payload-***. Not required, as long as the payload is well-formed (should be compatible with original PS4-***).

This fork makes several changes to the original PS4-playground to increase stability of running payload binaries and removes everything unrelated to this functionality.

A live demo can be tried here.

You should clone the repo and upload it your own server if you wish to make changes:

Code:
You can also download a zip of the latest source here.

Click "Go", and wait for the text "Stage: Waiting for payload..." to appear.

Send the desired binary over TCP to your PS4 on port 9023; you can use any standard networking tool to do this, or my custom Windows tool, WiFi-Loader

If you're on Linux, the easiest way is probably to use netcat:

Code:
After you have sent the binary, it will be executed automatically.
Cheers to @raedoob for the heads up on this PS4 Scene news in the PSXHAX Shoutbox earlier today! 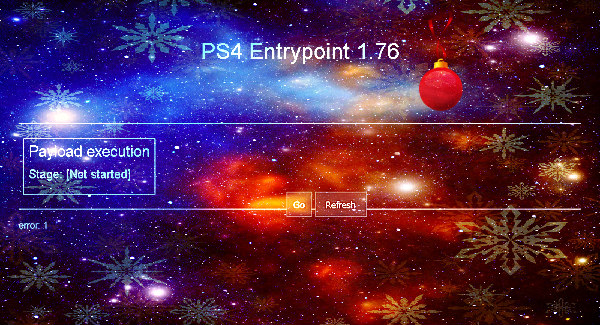 Staff Member
Moderator
Verified
I saw that and thought the same thing!

Senior Member
Contributor
Verified
There is a chance the ftp payload works better with this ? No, right ?

Senior Member
Contributor
Verified
So no more the irritating out of memory thingy?

Senior Member
Contributor
He appeared alongside them. And that's where he said he wasn't even allowed to comment on Sony hacks, but if he were, he'd give it a thumbs up. He said it was interesting how they are going through webkit and that hacking the PS3 was so much harder. Did you even watch the event or did you just read about it?