It's been a few months since the last PlayStation 4 security update, but today following the 6.00 PS4 Beta for testers Sony returns with PS4 System Software / Firmware 5.56 now live which, once again, according to their changelog improves system performance.

As always DON'T UPDATE if you wish to use PS4 game backups and homebrew apps, we'll add any related Tweets below as PlayStation 4 developers have a chance to examine it and to quote from their page: PlayStation 4 system software update

Main features in version 5.56 update
Here are some guides for those new on How to Block PS4 Firmware Updates, How to Delete Downloaded PS4 Update PUPs that haven't been installed yet, How to Update to a Specific PS4 Firmware and also some PS4 HEN Update Blocker Payloads.

Translation: [PS4 save editor] published on August 31, 2018 the latest system software "5.56" confirms that the Save editor works correctly. In the future, please confirm the news screen of the Save editor and the notice of this account when I update it. 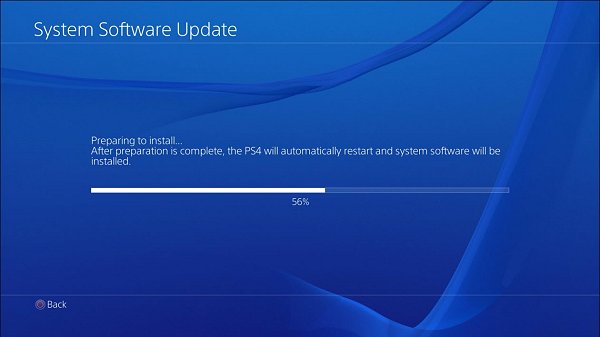 Developer
Senior Member
Contributor
Verified
If you beggers want 5.5X hax so bad then why not learn to code, reverse engineer and exploit consoles?

Devs have no obligation to release anything they make in private, especially if they get bombarded with “ETA WEN” bullsh!t.

Member
Contributor
Given all the "system performance" updates this thing has received, you'd think it should be running like a super compuer by now.

Instead, PS4Pro drops frames everywhere on something as menial as RE 7.

Senior Member
Contributor
Wow! I didnt know it was that easy! In that case I'll be back in 30 minutes with the full kernel exploit for everyone!!!!! Thanks for that info!

Senior Member
Contributor
@amirmahdi801 if you want Jailbreak then sell your ps4 and buy another with 5.05 it's simple ! Hackers have written that no one is planning to release another JB because consoles with soft 5.05 are generally still available for those who want JB.

@Abdulla123 bs I bet they don't release new Exploit After 6.0 firmware gonna be public released i think sooner will we see some spoofers and patches allowing to play new games on the old firwmware

Developer
Senior Member
Contributor
Verified
@Brigan if you can do all that in thirty...

Member
Contributor
Mathieulh has a working 5.55 jailbreak but apparently, he's never going to release it to the public. If by never he means "not until Sony have patched my exploit and 99.9% of normies are on a higher firmware with no exploit" then we all just need to be patient.


If by never he means "If one more person asks me when is the 5.55 exploit I swear ill ..." then by all means, keep bugging him (#Sarcasm)

Member
Contributor
Maybe a 5.5x exploit (i think the right word is exploit not jailbreak lol... but that's just me) will never see the light of day. There's a public webkit for 5.50 (never tried, but think it still works for 5.53) and if people really wanted a kernel exploit and had some coding skills they would use (or search for) some available code (change it, apply to new changes) and look for some entry points (kernel).

No one is obligated (the devs) to release nothing. I mean, most people just wants backups, they don't want to code nothing, bring something new to the scene (homebrews), just backups and kids that want "to improve" their gaming with modding. Hope that online modding won't be a thing like on X360 and PS3. I mean, in 100% of people wanting the exploit, i bet 80% are all about backups and modding and (maybe less) 20% for homebrews (or other) on their PS4.

I'm happy with a 5.05 PS4 for homebrews (i do have some backups) and a PRO for online (despite it isn't my main online plataform). I buy all the games i like (mostly exclusives) and use the XBOX ONE for online gaming (i prefer their service/servers for multiplayer). Never asked for nothing, if it comes out, i'm here to try them!

Also, there isn't infinite vulnerabilities, so they stay in private. If some 0day get's released (or leaked), it gets patched right away. So until a new one that's already patched is found and it doesn't leads to the first one (original entry point used to achieve some other(s) entry point(s)) to be patched (because you know, to be able to still use it on future firmwares) only then it might get to the public. Till then, wait or enjoy online gaming with plus or free2play titles.

The scene (not just the ps4) has less and less devs (imo) and the "circle" of trust is smaller... and smaller... despite we do see some great new devs coming every now and then, so things move slowly and with caution (imo) nowadays in some scenes.

Just wanted to share my opinion on the "eta of a new exploit". And i don't see it coming out for some long time... because the scene is more into backups and modding than homebrews (not all, but most end users). What i do see coming, will be something like a way to play newer titles (maybe it's just what people want) and maybe a way to play online better than port forward for people that have their exploited system, not with the rest of the online community that have "official firmwares" and perharps (we never know) a cfw! Or nothing of this will ever happen who knows wait and see..!!