Following the recent X-Project PS4 5.05 Self Host / ESP8266 updates and PS4 1.76 / 4.05 Lists, PlayStation 4 developer @DEFAULTDNB (aka KiiWii on Twitter) has now made available what he calls PS4IDENT which attempts to identify the potential OFW version of sealed new PS4 consoles by entering their model number or datecode in order to save time researching one before purchasing and avoid disappointment of getting one that currently can't be exploited and jailbroken.

To quote from KiiWii on the tool's release: PS4IDENT - Find hackable consoles!

I'm back with a new tool today which has one simple aim: identify the potential OFW version on a sealed new console (obviously this wont work for secondhand or refurbished consoles). No more need to scour the Internet and search forums, I have done it for you!
This is based on collated information (which is freely available) from PSDEVWIKI (HERE & HERE) Wikipedia (HERE), the uber-handy [Suggestion] PS4 Bundles & Firmware List thread by Scarecrow B, and a few long days of googling.

All you do is access the link, type in the relevant information from the console packaging and judge for your selves based on the traffic light warnings. (RED = forget it, YELLOW = possibly one OFW or the other, GREEN = almost definitely confirmed).

To avoid confusion: this is a java script web app & it does not require it to be run on a PS4, it will not detect a PS4, it can be run on any browser that supports JS.

I also wanted to showcase the various limited and special edition consoles that have been released (included CUHJ- and CUHS- models). They have been included, with images, but a quick access drop down list I had prepared didn't add anything to the app so I ditched it for the first release.

There are almost definitely overlapping/conflicting data points, and so this beta phase STRICTLY aims for people to verify the data more than use it to find a console, & I am asking you guys for confirmation/additional data to make this more accurate.

While I have, and will continue to update this and do my best to provide honest and impartial data, I can not accept any responsibility for any purchases that result in a incorrect firmware. I think it's impossible to know what every bundle and package will contain, but this will definitely rule out and funnel down the known data we have available to us. 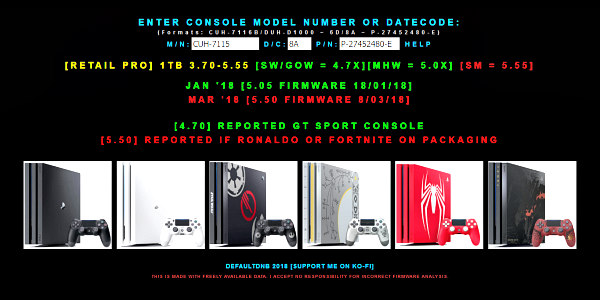 Senior Member
Contributor
Verified
I thank God I already got a PS4 Pr0. But I'm sure that more than one will serve Greetings.

Member
Contributor
in section D / C --- Not all PS4 have that number, My Ps4 Slim does not have D / C

What date does it say on your packaging? It should be easy to deduce.

Senior Member
Contributor
Verified
It would be great if you could mark points on console box which needs to be checked.
Thanks

Senior Member
Contributor
I had a pro limited battlefront one, comes with 4.70- 4.73 for sure if sealed. I bought my self A Pro Gran Turismo bundle last week came with 4.70 very lucky as it was the last one in the store sitting on a shell for a year now. Now that's being lucky..

As a general rule (not 100% perfect) any bundle with Ronald or fortnite in front is 5.5X.

Senior Member
Contributor
Verified
I am glad that I have a PS4 with 2 controllers included in the box - very rare finding over 4 years ago. Only available in Europe. It was FW 2.57 in it.

Member
Contributor
Verified
Great tool ! Will be useful for sure !