Since sharing the PS4 6.72 to 5.05 Game Backporting Instructions proceeding the 6.72 PS4JB earlier this month, PlayStation 4 scene developer @zecoxao passed along some additional details via Twitter outlined in the Tweets below alongside an NP-32046-5 Helper Script to Fix PS4 Encrypted Trophy Errors by @Sorrow446 on Github for those experiencing errors including "Cannot start the application. (NP-32046-5)" or "An error has occurred. (NP-32046-5)" which PSDevWiki translates to the error SCE_NP_TROPHY_ERROR_INVALID_TRP_FILE_FORMAT at offset 0x80551616.

This error occurs when an attempt to launch a fpkg packaged with encrypted trophies is made.

And from Jayinem81 comes a brief guide for those seeking to fix error NP-32046-5 on your own personal dumps, to quote:
You may have a corrupted save data just overwrite it and play.

Additionally, BlueCop notes "if you open /sce_sys/npbind.dat for the game in a hexeditor then you can see the NPWRXXXXX value in there" with some related topics below (sorted by date) for those new to the PlayStation 4 hacking scene:
small note: in the backporting tutorial, there were two things i left unoticed: the offset 0x28 of eboot ELF has to have 4 zeroes (start of section headers is 0) and the offset 0x3C has to have a zero (number of section headers is 0)
for those of you who have the error NP-32046-5, this is a trophy issue. you need to include the trophies from /user/trophy/conf correspondent to your game in sce_sys/trophy folder
exact same thing. in the case the game uses debug trophies, you need to convert the target id located in kernel memory at 0x1D8008D to 0x82 to play the game.
i bet you used the passcode to extract the trophy. that's not how it works. the trophy, even with the passcode, is still encrypted. you need the correct one from user trophy conf
Ok I'm dumped FIFA 20 and before repack I delete trophy from sce_sys/trophy folder and it work test in CUSA15546 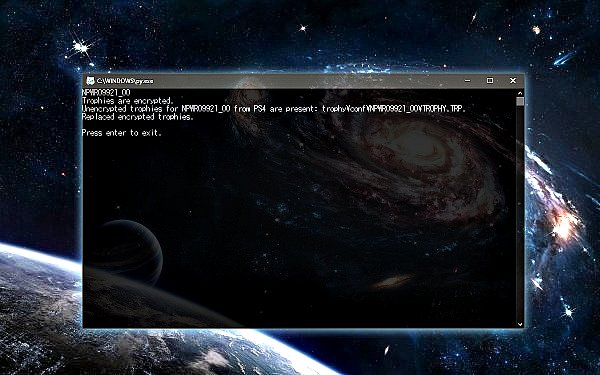 Member
Contributor
Hoping to see a video tutorial on these.... Thanks for your hard work....

Senior Member
Contributor
This means EA games are on to do list next for backporting ?

Staff Member
Moderator
Verified
About half way down the page there's a Tutorial to Backport EA Titles with Flatz's Trick added with some Twitter footnotes, however, after reading RetroGamer74's post it sounds like an 'automated procedure' to fix them isn't very feasible due to IDA Pro still being required in the process.

I remember way back in the PS2 days EA Patches were required to get their games running even with mod-chips... ironically back then they had above average security on their games yet several leakers in the private iRC channels were actually EA employees.

Member
Contributor
@uniformcoindsd I am also getting this error.l: <username> will be logged out of the ps4 because an error has occurred (ce-30391-6). And I thrown out to user selection menu. It has happened after 6.72 exploit. Now I am not able to run any disk games nor fpkgs. Please help me.

Member
Contributor
what happen why i got this

Senior Member
Contributor
Verified
Am glad this is finally getting the attention, have had this error for a month now. As soon as I get home will try to fix it using above methods.