Below are the changes, roughly translated from LizZo to quote: Release - Custom Firmware FERROX 4.81 v1.02 COBRA 7.5

We return once again with a new release for the PS3 scene! Tonight it was the turn of the new 2.1 version of the Custom Firmware 4.81 FERROX.

The new release has been produced with the 'intent to offer a CFW as clean as possible, for that section of users who want to play online with a little more tranquility. But do not worry, the other slices of users will settle!

This new 1.2 version of the custom firmware developed by Developer Alexander leads the addition of COBRA Patch 7.50. As I said, despite the COBRA functions, the FERROX is considered the cleanest CFW. It indicates particularly made for the use Online.

It also thanks the developer Habib for his valuable advice on porting 7.5. I think now you anyway know all the CFW of Cybermodding home, so let's do the rest.

CHANGELOG v1.02:
THE FERROX v1.02 FEATURES:
INSTALLING THE CFW:
TEST ON CONSOLE:
We tested every aspect, ISO PS3, PS2, PSX, PSP HDD, FAT32 and NTFS, PSP Minis and Remaster, PSN and Game Online, all COBRA functions, in short, we say a little of everything. If you find oddities let us know !!! Do not be shy

The new version 1.02 of the Custom Firmware FERROX thus brings the 'addition of COBRA Patch. However, we consider non-essential update if you are previous version 1.01+. The changes are not many in the new COBRA functions, and can not be of interest to most users. You choose what to do.

As always, we thank our dear friend and developer @Alexander for his continuous work!

If you have questions or concerns please let us know! We are always available for questions and clarifications, please feel free to ask! 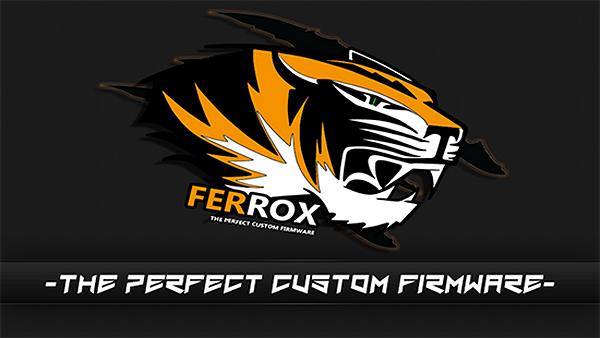 Member
Contributor
So is going online on this partially ok or better ok?

Staff Member
Moderator
Verified
They say it is 'made for the use online' yet the changelog only indicates that COBRA was updated to version 7.5 so odds are it's pretty much the same safety risk-wise on PSN... which is still taking a gamble

Member
Contributor
Every little change in the FW, brings a higher ban-risk.
If you really want to play online with less risk, then cobra is not your way

Blade said:
Every little change in the FW, brings a higher ban-risk.
If you really want to play online with less risk, then cobra is not your way

Can you please give me a link on how to convert cfw to ofw and use it on DB-cfw? Thanks.

Staff Member
Moderator
Verified
Here are some links for ya:

Blade said:
Every little change in the FW, brings a higher ban-risk.
If you really want to play online with less risk, then cobra is not your way

Good tip but a bad advice! Even this won't give you 100% safety as you said then you shouldn't say that in the first place. LOL!

PSXHAX said:
Here are some links for ya:

Temmy said:
Can you please give me a link on how to convert cfw to ofw and use it on DB-cfw? Thanks.
Click to expand...

@PSXHAX was faster ...
@azoreseuropa yep XD
or even better: go sp-int and 1on1 them game-devs on dev-server XD **
oh man, the good old times...

**just in case: just kidding, DON'T DO IT

Contributor
HI, newbie here, can i use this cfw on a CECH-3000? everytime im trying it says error file corrupted. i tried different usb, it says the same. please help