PS4 News       Thread starter PSXHAX       Start date Sep 14, 2021 at 1:36 AM       1,835       1
Earlier on LittleBigPlanet announced via Twitter that after extended downtime LBP3 PS4 servers are back online, however, servers for LittleBigPlanet, LBP2, LittleBigPlanet PS3 and LittleBigPlanet PS Vita have been permanently shut down to protect the community and help ensure their online environment remains safe.

For those who missed it this comes following the LittleBigPlanet File Editor / Texture Viewer, and according to a report by Kotaku.com hackers are at least partially responsible for Sony's drastic move to quote:

"Back in May, Sony shut down the servers for the first three LittleBigPlanet games (and the Vita version) due to ongoing attacks and malicious messages left by hackers. The issues went back to late last year, when Eurogamer reported that ongoing DDoS attacks and unstable servers could be traced back to a single fan who was “unhappy with Sony’s treatment of the franchise.” There were also reports from players of being unable to play some community-made content, and offensive messages appearing in-game."

To speculate with the above in mind, Sony's Bug Bounty Program that pays for finding vulnerabilities and Media Molecule's focus on newer IP including Dreams... could an underlying reason for the shutdown be cutting costs by putting money above fans as witnessed in the Take-Two Interactive GTA Mod Debacle earlier this month?

Feel free to share your thoughts in the comments below. 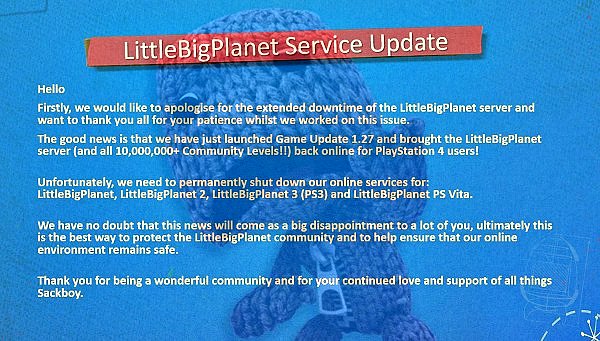 they shut them down after 6 years